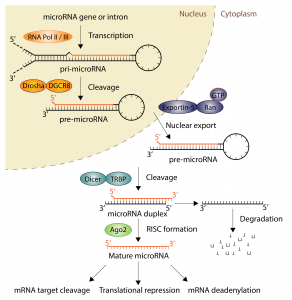 A step-by-step diagram of the miRNA mechanism.

miRNA genes are usually transcribed by RNA polymerase II (Pol II). They are initially transcribed as part of one arm of an ∼80 nucleotide RNA stem-loop that in turn forms part of a several hundred nucleotides long miRNA precursor called primary miRNA (pri-miRNA)s. A single pri-miRNA may contain one to six miRNA precursors. These hairpin loop structures are composed of about 70 nucleotides each. The double-stranded RNA structure of the hairpins in a pri-miRNA is recognized by a nuclear protein DGCR8 (or “Pasha”). DGCR8 associates with the enzyme Drosha to release hairpins from pri-miRNAs by cleaving RNA about eleven nucleotides from the hairpin base (two helical RNA turns into the stem) and resulting product is called a pre-miRNA (precursor-miRNA).

pre-miRNA hairpins are exported from the nucleus in a process involving the nucleocytoplasmic shuttle Exportin-5. In cytoplasm, the pre-miRNA hairpin is cleaved by the RNase III enzyme Dicer which interacts with the 3′ end of the hairpin and cuts away the loop joining the 3′ and 5′ arms, yielding an imperfect miRNA:miRNA duplex about 22 nucleotides in length. One strand of the mature miRNA is usually incorporated into the RNA-induced silencing complex (RISC) where the miRNA and its mRNA target interact and results in translational repression or target degradation.

Many studies are done using adenovirus, AAV, or lentivirus to deliver either the pre-microRNA or mature microRNA into the targeted cells for translational repression. The viral carrier is an excellent tool for in vivo delivery of microRNA compared with other method (e.g. transfection).

We offer a wide range of viral vector services to suit your research needs.

Is there something else we can help with?

Check out these resources or feel free to contact us via phone or email.